‘Murica. The land of the free, and the land that gave birth to me. A place of competition, sports, baseball, and summer. There is nothing more American than Yankee Stadium. When I set foot in its massive white-fenced exterior, I couldn’t help but think that I was a true patriot. Furthermore, I was about to be even more patriotic by eating a mustard drenched hot dog in a historic ball park. Furthermore, I was again even more patriotic because I braved the threat of Legionnaires disease and the Bronx in general to be there. Furthermore, I took that existing patriotism and multiplied it by patriotism again to produce patriotism squared. You know how I got patriotism squared? The hot dog was not a standard hot dog. Oh no, it was a footlong. ‘MURICA! FOOT LONG WIENERS! Now, don’t tell anyone that I was there for a soccer game… 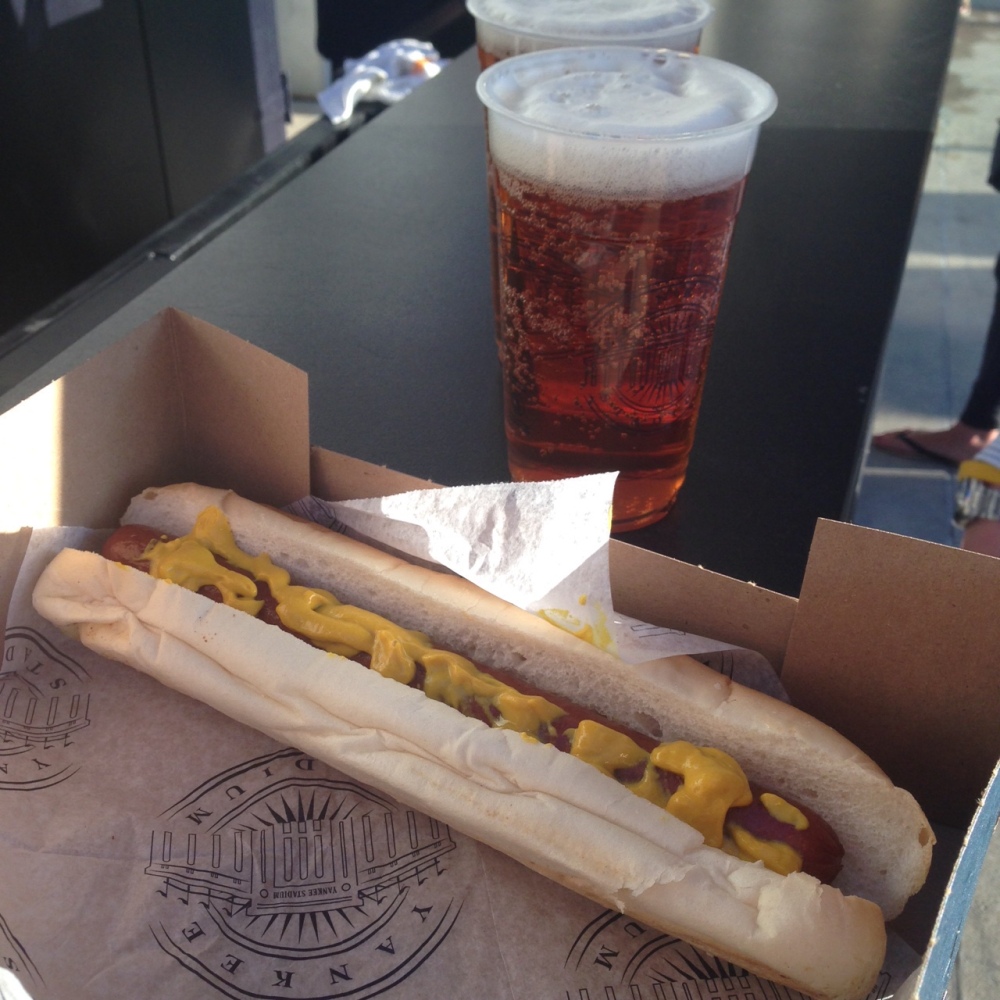 Good golly miss molly, look at that bad boy. This is a Hebrew National all beef wiener that has been rotating on hot steel for at least a fortnight. The bun is not toasted, and there was an option for onions or peppers but i respectfully declined. Their best dog was a classic with only yellow mustard. I also put the mustard on myself. (Because Americans work hard and are capable of doing things on their own. Capitalism. Adam Smith.) Just holding this beast of a sausage makes me feel manly. The smell, the chatter of thousands of fans surrounding me, and the sunset peeking through the pennants of years before make this a most memorable first bite. I even held the hot dog in my hands while the National Anthem was playing. (Think about the scene from Patton right now. Epic.)

What we had here was a good hot dog. There was nothing spectacular about it, and nothing unique to set it apart. The all beef taste was present, but it was lacking the snap, and lacking the toasted bun that I adore. What made this dog special was the environment it was eaten in and, most notably, its size. For all of you size queens out there, this dog is the dog for you. This was honestly, truthfully, a foot long. I’ve had other footlongs, but this one seemed bigger and better.

To quote the great Yogi Berra, the future ain’t what it used be. But I can tell you all with confidence, there are traditions that will always stick. The tradition of eating a hot dog in August at a baseball (or soccer) game is one that will be here forever. One day I hope to have a kid or kids and show them this tradition. Like a King passing his crown down to his Prince, I hope to pass down my hot dog to my son. So, the message here is not the rating that you see below, it is a message of American spirit. It is a message of family, hard work, and patriotism. God bless America.